" From my early teenage years I had trichotillomania, I began pulling my hair out. Don't know why or what made me start. It was almost always subconsciously.  Consequently, I then got patches of baldness in different areas on my head. Some I could cover up and some I couldn't.

I went years ignoring it, just accepting that that's how things where it's part of me so I'll just have to live with it.

Later family and friends used to tell me to 'just stop pulling it, it's that easy - It wasn't that easy!. If I didn't pull I would become annoyed, frustrated, occupied and then end up pulling far more.

In my early 20's I started Googling what this could be and came across the term 'trichotillomania' or 'trich,' for short. After reading about this and everyone's experiences I knew exactly that's what I had.

Because of this, I went to the doctor at university to tell her what Dr Google had diagnosed me with. The doctor had never heard of it and said I shouldn't trust the internet and it was just stress.

After that, I went about my life just accepting it but I self-diagnosed with Trich. Kept covering up, avoiding hairdressers, if anyone asked I said it was alopecia as that's easier than saying I was doing it to myself.

I was planning my wedding for the start of 2019 and decided I would get a hairpiece or big flowers or something to cover up any bald patches. My uncle had told my mum about Alan and how he helped him to stop eating rubbish. And sure enough, my uncle looked fab. My mum said I should go for my hair pulling. I was embarrassed, to be honest, and didn't want to have to address it I suppose.

I wasn't convinced that it could be addressed as all the research said there is no cure!

Plus I honestly wasn't sure about hypnosis, so I agreed with mum that I would try one session and if I thought it was ridiculous then I wasn't going back. 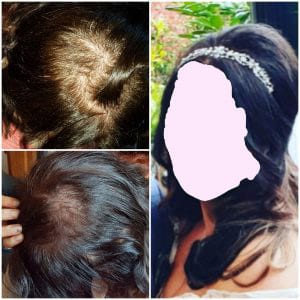 So off I went on a Sunday morning to see Alan, who immediately put me at ease.

He was the first professional person ever who said 'yes I know what it is, its trichotillomania and I know what you're going through.

Better yet he was able to tell me why it was happening and confidently promised me that I would stop from the second I left his office.

I didn't pull for a full month, then I had a bit of a wobbly - spoke with Alan again and haven't done it since.

I got married this year with no hairpiece - just my own hair - and it was like a dream come true.

Having my hair back, having my control back gave me so much confidence and has made me feel human again.
I cannot thank nor recommend Alan enough, even if you're not sure just give it ago. It is truly life-changing.
F.... "