Alan GilchristNews ArticlesPhobiasPanic for Millions of People Around the World!

Panic for Millions of People Around the World!

It’s that time of the year again that causes millions of people to live in terror for 24 hours. Another Friday 13th is now upon us again this week.

Millions of people throughout the world live in terror of this particular day and virtually become a recluse in their own home with this phobia, an irrational fear that something awful is about to befall them.

Even film studios are cashing in by making vast amounts of money with horror films about Friday the 13th.

Such superstitious beliefs are also quite prevalent in Greece and Spain where usually Tuesday the 13th is considered the unluckiest day.

In 2015 there were 3 Friday 13ths for the poor phobic person to endure – February, March, and November. Thankfully this doesn’t happen again until 2026 but each year has at least one or two of them and 2022 falls into that category on Friday

But did you know that the fear of the number 13 is called Triskaidekaphobia, and the fear of Friday 13th is called Paraskavedekatriaphobia?

The phobia Paraskavedekatriaphobia derives from a 99-year-old word made up of a combination of the Norse and Greek roots words for ‘Friday’ (Paraskeví), ’13’ (dekatreís), and ‘fear’ (phobia).

Friday has long been considered unlucky for many reasons such as in religion with Jesus being crucified on a Friday with Judas, one of the 12 Apostles and who betrayed Jesus, was supposedly the 13th guest to sit down at the Last Supper.

In Scandanavia, Frigga was a love goddess, who was worshipped on the sixth day of the week. Christians called Frigga a witch, and considered Friday to be the witches’ day plus the number of witches needed to form a coven!

Some academics suggest that the fear of the number 13 originated in a myth, whereby 12 Gods were having a feast in Valhalla. It is said that the naughty and crafty Loki disrupted the event and appeared as the 13 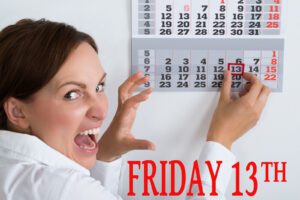 thguest making Hod, (the blind God of darkness) throw a branch of mistletoe at Balder (the God of delight and cheerfulness). Balder was instantly killed and the earth was forced into eternal darkness and mourning.

One famous person who supposedly had the fear of the number 13 was Queen Victoria. The story goes that she was invited to a diner but refused to join the other guests because she would have been the 13th at the table, until someone pointed out that one of the guests was pregnant!

There are millions of people throughout the world who have strange phobias and over the years I have had to help them overcome them using Fast Track Hypnosis.

What started out as a personal interest in the various phobias that people can have, ended up with me compiling a list and putting in on my website.

They range from the fear of the mother in law, Penthraphobia to the fear of long words, Hippopotomonstrosesquippedaliophobia , which would in itself make the person have a phobia about a phobia! Oh, and guess what, that’s called Phobophobia !

Over the years that I have compiled the list of phobias and their names, it may surprise you to know that my list now extends to over 250 and it is still growing. Two that I have successfully treated but as yet have found no name for, is a phobia of hair remover and another of plastic spiders!